The Kasson-Mantorville School District is the heartbeat of the growing Kasson and Mantorville communities located just outside of Rochester, Minnesota. The district has roughly 2,300 students, four schools, three buildings and works hard to earn recognition as a premier school district in which to learn and teach.

First, daily copier and printer issues were a burden for their IT team. Frustrated end users were not able to get timely support from their previous vendor and leaned on the IT team to escalate printer service tickets.

“My internal IT service desk needed to be taken out of the picture, because we were spending way too much time resolving issues, whether that was a network issue or physical print issue," said Ryan Hill, Chief Information Officer at Kasson-Mantorville.

Kasson-Mantorville strives to deepen and personalize learning instruction in the classroom. Hill needed his internal IT team focused on the technologies to make that happen, rather than day-to-day business functions such as printing.

“Choosing Loffler was one of the best vendor experiences and implementations I have been a part of. It was very hands-off for me.”

Second, unreliable copiers and printers caused a lot of wasteful printing. The district prints about 4.5 million pages per year, and they needed a solution to support that usage. It was common for students and staff to either forget they had printed, or the printer would be down, so they would print again to another device. Once the device came back online, it would print without someone there to claim the papers.

“We were seeing a rising printing cost due to all the malfunctioning machines,” Hill said, “and specifically the abandoned printing that was taking place around that.”

Third, Chromebooks and Google Cloud Print did not work reliably with their printers. As a Google Apps for Education school district, all students use Chromebooks. Kasson-Mantorville needed a way to print securely from Chromebooks to meet FERPA and HIPAA data privacy requirements.

The district took bids from seven printer and copier vendors. Hill and his team visited Loffler’s corporate headquarters where Loffler's Chief Technology Officer sat down with them to hear their issues, put a plan together and make a recommendation based on these issues. He also walked them through the machine recommendations and demos in the Loffler showroom.

“It was very apparent that the customer experience and voice was very important to Loffler when a company of their size was taking the time to do this for a potential account of our size,” Hill said.

Loffler also performed a print study to verify which equipment would be right for Kasson-Mantorville’s environment. After the print study, Loffler representatives helped to introduce the Canon brand and uniFLOW.

“My team has been completely taken out of the print environment picture. We hear zero complaints from our users."

Kasson-Mantorville needed the new solution implemented over the summer before the school year started. Because Hill’s team is busy with many projects during the summer, it was imperative that Loffler took the lead on the print implementation. Loffler configured print servers, uniFLOW servers and all the networking. Loffler also built the configuration on the machines to fit the district’s needs.

“Choosing Loffler was one of the best vendor experiences and implementations I have been a part of,” Hill said. “It was very hands-off for me.”

The new machines are high-quality and reliable, reducing the printer burden for Hill's IT team. They can now focus more time on facilitating classroom technologies.

“My team has been completely taken out of the print environment picture,” Hill said. "We hear zero complaints from our users."

The uniFLOW Follow-Me-Print functionality reduces abandoned print jobs and wasteful printing. They have experienced cost savings stemming from a 20% reduction in printing.

“With Loffler and uniFLOW,” Hill said, “the job doesn't actually spit out of the machine until we're there to release it. If we forget to go print, then after X amount of hours, those jobs delete from the queue.”

uniFLOW has also given students and teachers secure printing abilities for their Chromebooks. Other beneficial gains with their new printing solution include card swipe authentication, guest printing, cost centers, usage reporting and move from faxing to encrypted email and file transfer scan to Google Drive and OCR technology.

“Being in IT, you usually don't get a lot of praise,” Hill said. “You usually just hear about when there are issues. This project was an exception to that. We received praise from users on the new machines and software for months. I actually just heard one again the other day and we're nine months out from the implementation.”

Ready to Improve Your Print Environment?

For Kasson-Mantorville, upgrading printers and copiers meant freeing up time for the IT team, reducing printer waste by 20% and providing students and staff with secure printing. 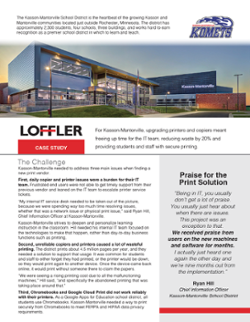 “Being in IT, you usually don't get a lot of praise. You usually just hear about when there are issues. This project was an exception to that. We received praise from users on the new machines and software for months. I actually just heard one again the other day and we're nine months out from the implementation.”