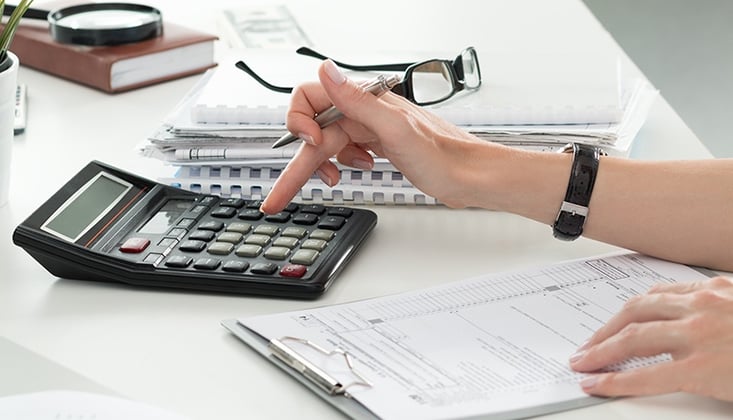 The 2017 TCJA (Tax Cuts and Jobs Act) made significant changes that impacted most — if not all — taxpayers. Increased deductions for bonus depreciation and Section 179 expense were just two of the changes impacting business taxpayers, and these largely positive changes represent two potentially huge tax savings for businesses.

We’re focusing on just one narrow but very important aspect of this Tax Reform legislation, specifically tax depreciation. Depreciation is the term the IRS and tax accountants use to refer to the write-offs all businesses receive when they purchase equipment.

The Tax Reform extended and modified bonus depreciation to allow businesses to immediately deduct 100% of eligible property placed in-service after September 27, 2017, and before January 1, 2023.

Bonus depreciation continues to be available for qualifying property, which is generally property with a depreciable recovery period of 20 years or less. Plus, eligible property is expanded under this legislation to include used property. Here’s a table that shows how long this tax savings opportunity is available: 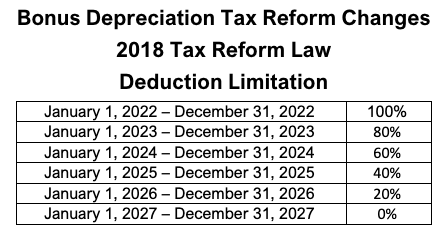 Section 179 of the Internal Revenue Code allows a taxpayer to immediately expense the cost of qualifying property—rather than recovering such costs through depreciation deductions. The maximum amount a taxpayer can deduct under Section 179 is $1,080,000 for 2022. The phase-out threshold is $2,700,000 for property placed in-service during 2022.

Almost all legitimate business equipment qualifies: office equipment and office machines such as copiers and printers; electronics such as computers, laptops and related peripherals; business non-custom software; machinery; some business vehicles; office furniture; and many other types of tangible equipment.

Another complicating factor to this decision can be the amount of equipment that you are purchasing. Section 179 has an upper limit of $2,700,000. Once that limit is reached, the amount of a company’s expensing election will be reduced. Bonus Depreciation does not have that upper limit.  In this particular situation, Bonus Depreciation may be a more tax efficient option.

A multitude of other factors may need to be considered as well. Current year profit of the company as compared to the company’s budget for future years, the income tax basis of an S corporation shareholder as well as state income taxes can all be issues that need to be considered. Again, your tax accountant should be consulted on this decision. But it is a great time to be buying equipment and making this decision. After all, we’re talking about saving big money on taxes.

Read Next: The Advantages of Leasing vs. Buying a Copier

The information in this blog should not be considered rendering of advice. The information is provided for informational purposes only and is not intended to substitute for obtaining accounting, tax, legal or financial advice from a professional.

Neil Lee is Loffler's Chief Financial Officer and on the Executive Team. For the past 15 years he has been an integral part of determining strategy and direction for the company and is a key factor in developing and providing the award-winning technology and managed services Loffler consistently delivers.

Get the latest posts in your email!

10 Reasons to Invest in a Large Format Printer

Original post 3/24/17 Update 11/16/22 Whether your work is focused on technical printing for engineering, construction, ...
Read More

The 2017 TCJA (Tax Cuts and Jobs Act) made significant changes that impacted most — if not all — taxpayers. Increased ...
Read More

A3 vs A4 Printers & Copiers: Differences, Advantages & How to Choose

If you’re in the market for a printer or copier, the terms A3 and A4 are probably popping up.  What’s the difference?  ...
Read More